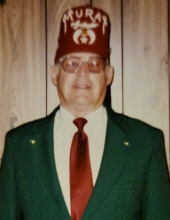 He grew up in Marion, Kentucky, before moving to the Indianapolis area. He and his late wife, Nancy, eloped after their sophomore year in high school. She preceded him in death in 2008. Ben had a successful management career, first with National Malleable & Steel Castings. He then worked as a supervisor for Reilley Industries for 31 years, retiring in 1991. Ben was very active in the Masonic order as a member of the Indianapolis Lodge #669, Scottish Rite, and the Murat Shrine. Ben became a tour guide at the Scottish Rite and served in that role for many years. He also was a part of the transportation club with the Murat Temple, transporting children to Shriner’s hospitals in Chicago and Cincinnati. Ben will be fondly remembered for his kind spirit and generosity.

In addition to his parents and his beloved wife, he was preceded in death by a son, Ronald A. Ferrell; siblings, Louis A. Ferrell, Lemma L. Farley, and Ruby E. Arflack.

Survivors include one daughter, Sandra L. Barnard and her life partner, Phillip Hilderbrand.

Visitation will be Monday, September 20, 2021, 10 am to 11 a.m., at the Carlisle – Branson Funeral Service & Crematory, Mooresville. The Masonic Memorial will begin at 11 a.m., followed by the funeral service. Burial will be at West Newton Cemetery. Visit www.CarlisleBranson.com to share a favorite memory.

To order memorial trees or send flowers to the family in memory of Benjamin W. Ferrell, please visit our flower store.