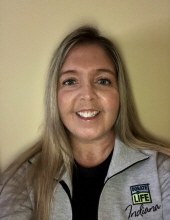 Brook grew up in the small knit, rural community of Eminence, where she attended school from kindergarten until her graduation from high school in 1993. She attended Indiana University and Ivy Tech, usually focusing her studies on the medical field. She worked at the Southside OBGYN for several years. At an early age, Brook also became interested in being a firefighter and EMT. She was a volunteer firefighter and EMT for many years with A&A, Decatur, and Brown Townships. Brook was also a Red Cross Disaster Assistance Team volunteer. This love and respect for public service eventually led to her engagement to the love of her life, Chris Mills, on September 9, 2020.

Brook developed breathing issues as a child that over time caused serious health issues. She was dependent on oxygen for years until she was given second life on March 14, 2015 – the day Brook received new lungs. This became Brook’s second birthday and also created an entire new chapter in her volunteerism. She became passionate about educating others about the importance of being an organ donor. Brook worked with the Indiana Donor Network as a team member, advocate, and educator. She was a medalist in the Transplant Olympics locally and internationally during the last five years. Brook also honored her donor for giving this new life to her and was eternally grateful for this gift. Simply put – Brook was a giver. She continued her generosity with her own donor gift at the time of her death.

Brook’s Life Celebration® visitation and funeral service will be held at Carlisle – Branson Funeral Service & Crematory, 39 E. High St., Mooresville. Visitation will be Tuesday, June 22, 2021, 3 to 8 p.m., with the funeral service on Wednesday, 11 a.m. Burial will be in West Newton Cemetery. Masks may be worn at your own discretion. Memorial contributions may be made to the Indiana Donor Network. Visit www.CarlisleBranson.com to share a favorite memory or to sign the online guest registry. "Just Keep Swimming!"

To order memorial trees or send flowers to the family in memory of Brook Rene Zander, please visit our flower store.