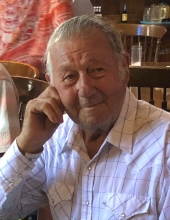 Chester “Chet” Cooper
90 of Mooresville, passed away on August 3, 2020 at St Francis Hospital in Mooresville. Chet was born July 7, 1930 in Indianapolis, IN to the late Emery and Alda Cooper.

Chet proudly served his country in the U.S. Army during the Korean War, earning the rank of Staff Sergeant. He was united in marriage to Frances Josephine (Warren) Cooper on May 9, 1953 and were happily married for 59 years, until her passing in 2012. He remained close to the Warren family throughout his life and remained close to them following Frances’ passing.

Chet worked many jobs over the years including Maplehurst Dairy, John Deere in Mooresville, and Hardin Heating and Air, before becoming owner operation of his own HVAC company in the 1970’s until his retirement. He attended Gasburg Baptist Church and enjoyed square dancing with his wife for many years. He continued his love of square dancing with his special friend and companion, MaryAnn Hibler. Additionally, he enjoyed horseback riding, old cars and would always help anyone in need.

Services will be private. Burial will be in White Lick Cemetery.

To order memorial trees or send flowers to the family in memory of Chester "Chet" Cooper, please visit our flower store.