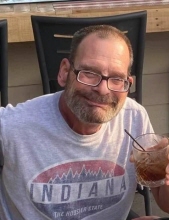 Christopher C. Jones, 59, Indianapolis, passed away unexpectedly at home September 20, 2020. Chris was born May 13, 1961, in Martinsville, to the late Jeanne (Kinder) Jones and Charles Jones, who survives.

He graduated from Mooresville High School in 1979 and was employed with the Local Union 18 at Frost & Pipe Insulators for several years. Always mechanically minded, Chris enjoyed working on cars, especially his Ford Torinos. He also loved music – Rock & Roll was his favorite, and he always tuned into the Bob & Tom Show. In addition to his loving family, Chris leaves behind two beagles who were his constant companions, Bogey and Brody. He was a loving husband, son, brother, and father to his only son, Matthew. Chris will be fondly remembered for his kind and caring nature.

Chris was preceded in death by his mother, Jeanne (Kinder) Jones.

Friends and family are invited to visitation on Thursday, September 24, 2020, 5 to 8 p.m., at the Carlisle – Branson Funeral Service & Crematory, Mooresville. Services will not be observed. Cremation will follow at the Morgan County Crematory. Memorial contributions may be made to Houndsong Rescue; envelopes will be available at the funeral home. Visit www.CarlisleBranson.com to share a favorite memory or to sign the online guest registry.

To order memorial trees or send flowers to the family in memory of Christopher C. Jones, please visit our flower store.