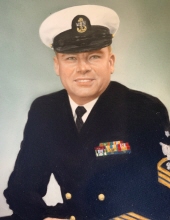 After graduating from Gosport High School in 1948, Bud went into the U.S. Navy, where he proudly served for 20 years before retiring. He then embarked on a career as a letter carrier for the U.S. Postal Service in Indianapolis, where he retired after 22 years. He was a lifetime member of the American Legion Post #61 and the V.F.W Post #1111.

He married the love of his life, Mary Powers on June 11, 1955 and were married for over 65 years. Together they had four sons, Brad, Scott, Gregory and Jeffrey. He enjoyed spending time outdoors hunting and fishing. His generous spirit will be greatly missed by all.

In addition to his parents, he was also preceded in death by his sister Caroline Hough.

As per Bud’s wishes, he will be cremated and laid to rest in Gosport Cemetery at a later date. No formal services will be observed at this time.

To order memorial trees or send flowers to the family in memory of C.K. "Bud" Butterfield, please visit our flower store.