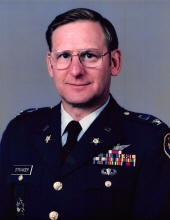 Colonel (Retired) Steven A. Strawder, age 82, of Bonita Springs, Florida, passed away July 28, 2022. Col. Strawder was a former longtime resident of Mooresville, Indiana. Steve was born in Indianapolis, Indiana, to the late Frank and Evelyn Strawder. Steve was a 1958 graduate of Mooresville High School, a 1985 graduate of Marian College, and a 1991 graduate of Indiana University. Steve served as a full time National Guard Federal technician from 1968 until his retirement in 1994. Steve enlisted in the National Guard at Martinsville, Indiana on 14 June, 1961 as a private E 1. He was commissioned a 2LT in July 1965 and his command time included command of Company E (Aircraft Maintenance Company, 738th Maintenance Battalion, and 38th Aviation Brigade. He finished his military career as the Director of Army Aviation, Safety, and Occupational Health for the State of Indiana. Besides achieving the rare promotional mobility from Private E 1 to full bird Colonel, other noteworthy military achievements included achieving the highest aviation badge available, that of Master Army Aviator, and for receiving the Broken Wing Award for successfully handling and in-flight engine failure while conducting a maintenance test flight. Colonel Strawder was a graduate of Army Airborne School, US Army Jungle Warfare School, Infantry Officer Basic Course, Transportation Officer Basic and Career Course, Maintenance Test Pilot Course, Helicopter Instructor Pilot Course (OH 58), and US Army Command and General Staff College. His awards include The Meritorious Service Medal and Army Commendation Medal. He was awarded Sagamore of the Wabash by Governor Evan Bayh.

“The Colonel” as he was know to his friends in Mooresville, served as President of the Board of Directors for Hill Water Corporation from 1991-98. Steve was a life member of Marian College Alumni Association, Indiana University Alumni Association, National Guard Association of America, National Guard Association of Indiana, and the Nation Rifle Association. Steve also became a licensed barber during his retirement in Florida and was an avid long distance motorcycle rider, having completed the infamous 4 corners ride at age 66.

To order memorial trees or send flowers to the family in memory of Colonel (Ret) Steven A. Strawder, please visit our flower store.