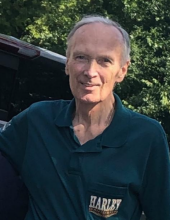 77, of Mooresville passed away on December 19, 2022, peacefully at home. Dennis was born on May 24, 1945 in Indianapolis, Indiana to the late Robert William Pitcher and Alice Lucille (Costin) Pitcher.

Dennis proudly and honorably served in the U.S. Army during Vietnam. Upon returning from service, he worked for the Speedway Police Department and retired from General Motors after 20 years of service in 2006. He was a member of Souls Harbor Church in Plainfield, American Legion Post #103, the V.F.W Post #1111 in Mooresville, Speedway Masonic Lodge #500, and the Murat Shrine.

Dennis lived life to its fullest, on his terms, often being mistaken as a Clint Eastwood look alike. Although stubborn at times, he had a deep love of family and enjoyed spending time with them as well as riding his Harley Davidson Tri Glide with his beloved wife Shirley, taking road trips across the country. He will be missed by his loving family and many friends.

In addition to his parents, he was preceded in death by his sister Peggy Broadstreet and a son Dennis Pitcher, Jr.

Family and friends will gather to celebrate Dennis’ life on Monday, Dec. 26th from 5-7pm at Carlisle Branson Funeral Service & Crematory, Mooresville. Funeral services will be held on Tuesday, Dec. 27th at 11am in the funeral home. Burial will follow the services in Oaklawn Memory Gardens, Fishers, IN.

Memorial contributions may be made in Dennis’ memory to the Wounded Warrior Foundation, PO Box 758516, Topeka, Kansas 66675 https://support.woundedwarriorproject.org/

To order memorial trees or send flowers to the family in memory of Dennis R. Pitcher, please visit our flower store.