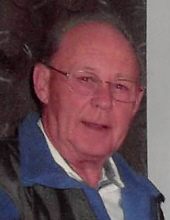 Donald R. Simpson, 77, of Indianapolis, passed away August 9, 2021, at IU Health Methodist Hospital. Donald was born October 8, 1943, in Martinsville, Indiana, to the late Nelson and Edith (Rothrock) Simpson. He married the love of his life, Kathryn Scroughams, on October 9, 1965.

Donald was a member of the Church of Jesus Christ Latter - Day Saints. He was a member of the VFW Post 1111, Mooresville; Donald always ran the cotton candy and snow cone machine at all the functions the VFW put on. He will always be remembered as the one-legged man on crutches. Donald did not care where the watering hole was if he was able to fish. He always enjoyed getting his family time in especially with his grandchildren. Donald is going to be greatly missed by his loving family and friends.

In addition to his parents, he was preceded in death by his son Eddie “Lockerbie” O’Conner, and brothers, Terry, Larry, Sonny, and Bud.

Donald’s Life Celebration® visitation and funeral service will be held at Carlisle – Branson Funeral Service & Crematory, 39 E. High St., Mooresville. Visitation will be Friday, August 13, 2021, 4 p.m. to 7 p.m., service will follow at 7:00 p.m. Private burial will be at Centerton Cemetery, Centerton, Indiana. Visit www.CarlisleBranson.com to share a favorite memory or to sign the online guest registry.

To order memorial trees or send flowers to the family in memory of Donald R. Simpson, please visit our flower store.