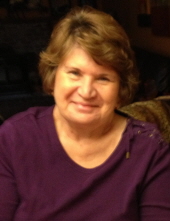 Enona M. (Gray) Brewington, 74, Camby, passed away December 25, 2021, at Franciscan Hospice House. Mrs. Brewington was born June 13, 1947, in Celina, Tennessee, to the late Odell and Beatrice (Adams) Gray. She married Carl W. Brewington on September 11, 1965, and he survives. They were blessed with three sons, Robert W. Keith A. and the late Kevin A. Brewington.

She graduated from George Washington High School and attended Marian University. Enona was employed at Eli Lilly & Company for many years, retiring in December 2009. She loved sports, especially the ones her sons and grandsons were playing – she was always their biggest cheerleader. She and Carl traveled to all 50 states and spent many winters in Gulf Shores, Alabama. She was a huge IU Basketball fan, loved to ride motorcycles with Carl, and was also a talented artist who enjoyed painting. Enona and Carl were fortunate to enjoy similar hobbies and created many memories on the golf course too. Her memory will be cherished by a loving family and friends.

In addition to her parents and son, she was preceded in death by two brothers, Billy A. and Bobby C. Gray; sisters, Sherry Gray and Kimberly Black; brother-in-law, Johnny.

Enona’s Life Celebration® Visitation will be Sunday, January 2, 2022, 1 to 3 p.m., at the Carlisle – Branson Funeral Service & Crematory, Mooresville. Services will follow at 3 p.m. Cremation will take place after services, and a private inurnment will be held at White Lick Cemetery. In lieu of flowers, memorial contributions may be made to the Franciscan Hospice House. Visit www.CarlisleBranson.com to share a favorite memory or to sign the online guest registry.

To order memorial trees or send flowers to the family in memory of Enona M. (Gray) Brewington, please visit our flower store.