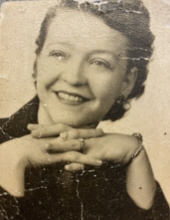 Frances M. O’Connor
91, of Mooresville, passed away on April 16, 2021 at Home View Health Care & Rehabilition in Franklin. Frances was born on April 1, 1930 in Cunningham, KY to the late Flessie Emer (McKnabb) and Lawrence Clyde O’Connor.

Frances was united in marriage to Maurice L. O’Connor on June 9, 1950 and was married for 54 years until his passing in 2004. She and Maurice were founding members of St Thomas More Catholic Church in Mooresville. She volunteered her time in serving others. She volunteered at Churches in Mission and various nursing homes as a candy striper, offering hope and joy to others less fortunate. She will be remembered as a loving mother, a friend to everyone, helping those in need and her positive outlook on life.

In addition to her parents and her husband, she was preceded in death by a son Lawrence O’Connor; brothers J.R. Puckett, Clarence Puckett, Charles Puckett; sisters Maggie Crawford, Theresa Jane Speed and a grandson Jeffrey O’Connor.

Visitation will be held on Monday, April 19th from 4-8pm at St. Thomas More Catholic Church in Mooresville. A Mass of Christian Burial will be held on Tuesday, April 20th at 10am in the church. Burial will follow the services in St. Martin of Tours Catholic Cemetery in Martinsville. You are also invited to watch the services via live stream on the Carlisle Branson Facebook page.

In keeping with Frances’ spirit of helping others, memorial contributions may be made in her memory to Churches in Mission 27 S Indiana St, Mooresville, IN 46158.

To order memorial trees or send flowers to the family in memory of Frances M. O'Connor, please visit our flower store.