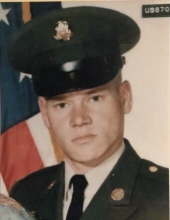 Gary proudly served in the United States Army during the Vietnam war. He also attended Memorial High School in Waynesburg, Kentucky. He was employed at Reliant Automotive and also at the Indiana Law Enforcement Academy for many years, retiring in April 2014. He had an incredible work ethic and took great pride in providing for his family. Gary was a faith-filled man - he was a member of Good Shepherd Baptist Church and formerly was a member of Life Line Baptist Church and Victory Baptist Church. Gary was an avid outdoorsman and always looked forward to fishing and hunting. He was extremely gifted with a mechanically inclined mind and could fix anything with an engine. Gary loved his family and was exceptionally proud of each of his children and grandchildren. Simply put, Gary was an incredible dad.
He will be finally remembered by loving family and many friends for his caring and compassionate manner.

In addition to his parents, he was preceded in death by a brother, Larry Padgett; sisters Naomi Cooper, Sylvia Bradshaw, and Stephanie Padgett; great grandchild, Kayge Padgett.

Gary’s Life Celebration Visitation will be Monday, December 27, 2021, 4 to 8 p.m., at Good Shepherd Baptist Church. The funeral service will begin at 11 a.m., Tuesday, December 28, 2021, at the church. Longtime family friend, brother Lyman Taylor, will officiate. Garry will be laid to rest next to Evelyn at West Newton Cemetery. Carlisle - Branson Funeral Service & Crematory is serving the family. Visit www.CarlisleBranson.com to share a favorite memory or to sign the online guest registry.

To order memorial trees or send flowers to the family in memory of Gary C. Padgett, Sr. , please visit our flower store.