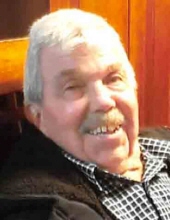 Gerald L. Christner
82 of Mooresville, passed away on January 8, 2022, at Community South Hospital in Indianapolis. Gerald was born on January 11, 1939 in Topeka, Indiana to the late Monroe Christner and Edna (Hershberger) Christner.

Gerald owned and operated Christner Excavating and Lawn Care in Mooresville. Never knowing a stranger, Gerald was well known throughout Mooresville and Morgan County. His warm, kind personality shined through as he enjoyed visiting with friends and family, often over a cup of coffee. He was also a member of the First Baptist Church in Mooresville. He was also a huge fan of Mooresville Boys’ Basketball, where he was named “Fan of the Year” several times as he never missed a game. He will be missed by a loving family and friends.

In addition to his parents, he was also preceded in death by daughter Rita Keller, brothers Adrian, Allen, Arnold, and sisters Esther and Marie.

Family and friends will gather to celebrate Gerald’s life on Tuesday, January 18th from 12pm-2pm at Carlisle Branson Funeral Service & Crematory, Mooresville, with services beginning at 2pm Tuesday in the funeral home.

To order memorial trees or send flowers to the family in memory of Gerald L. Christner, please visit our flower store.