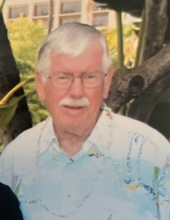 Hank was born at home March 22, 1941, in Munising, Michigan, in the upper peninsula of Michigan, to the late Henry A. and Beatrice Anna (Nickle) Raymond.

He graduated from Purdue University in 1964 and again in 1974 with a master’s degree in Audiology. He worked as an audiologist at the VA Medical Center in Indianapolis for 35 years.

He proudly and honorably served in the United States Marine Corp for three years, 13 months of which were spent in Vietnam. He later joined and retired from the United States Army Reserves, attaining the rank of Major during his time of service.

Hank had a deep love for family and was happiest on the many family vacations that he took with his wife, son, daughter-in-law, and grandchildren. He especially treasured the many memories of the western trips, the first Walt Disney World trip, and most recently, “Steven’s trip”.

Visitation will be Wednesday, December 28, 2022, 12 to 2 p.m., at the Carlisle – Branson Funeral Service & Crematory, Mooresville. The funeral service will follow at 2 p.m., with Pastor Guy Lancour officiating. The burial, with military honors, will be in White Lick Cemetery, Mooresville. In lieu of flowers, memorial contributions may be made to the Wounded Warriors Project, https://www.woundedwarriorproject.org/. Visit www.CarlisleBranson.com to share a favorite memory or to sign the online guest registry.

To order memorial trees or send flowers to the family in memory of Henry A. "Hank" Raymond, please visit our flower store.