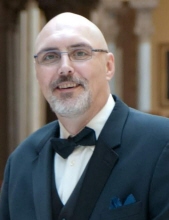 James Allen Richey 55, of Indianapolis passed away peacefully and earned his eternal place in Heaven on September 25, 2022.

Jim was an Army Veteran and for his career he served at the Plainfield Correctional Facility as an officer, proudly obtaining the rank of Lieutenant. In his time there, he led the S.E.R.T & Hostage Negotiation Team.

After retiring, James shared many passions and hobbies that included, but not limited to, professional sports card and memorabilia collecting, woodworking, tinkering, drumming, singing, flying the virtual skies of Flight Simulator, and most importantly, his family.

Jim spent thirty-seven wonderful years with his wife Ellen and share a love that can only be described as storybook, a love that many in their lifetime will never experience. He loved his family fiercely and they always came first, no matter the cost. James will always be remembered with a smile on his face, love in his heart, an abundance of laughter and nothing but cherished memories.

Jim’s Life Celebration Visitation and Funeral Mass will be held at St. Ann Catholic Church, 6350 S. Mooresville Road, Indianapolis, IN 46221. The visitation is Thursday, September 29, 2022, 5 to 8 p.m. The Mass of Christian Burial will begin at 11 a.m., Friday, September 30, 2022. Burial will follow at West Newton Cemetery. Carlisle – Branson Funeral Service & Crematory, Mooresville, is serving the family. Visit www.CarlisleBranson.com to share a favorite memory or to sign the online guest registry.

To order memorial trees or send flowers to the family in memory of James Allen Richey, please visit our flower store.