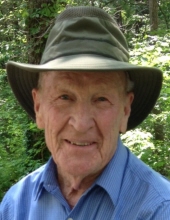 James Bernard Norris of Cave City, KY passed into eternity at 9:55pm Thursday evening at Life’s Journey Hospice in Avon, IN. His daughter and grand daughter were by his side. J. B. was 95 years old.

J. B. was the second son born to Joseph E. Norris and Effie Mae Melvin on June 2, 1925, in Loogootee, IN. As a young man he entered the Navy during WWII and was stationed in the South Pacific on the USS Onslow. J.B. attended Indiana State University and became an educator. He had a passion for teaching and worked for 30+ years as a school teacher and administrator in Wayne Township, Indiana. He had a love for the outdoors and for a time was the Chief Naturalist for Indiana State Parks. In 1973 he began working at Mammoth Cave National Park in the summers and after retirement from education he became a Cave Guide/Interpreter, year round.

J.B.’s final resting place will be Indiana Veterans Memorial Cemetery in Madison, IN.

J. B. was preceded in death by his parents and five siblings. As well as his granddaughter, Casey Norris and great-grandson, Alexander Borden.

The graveside service will be held Friday, December 18, 2020, 11 a.m., in the Madison (Indiana) Veterans Memorial Cemetery. The service will be livestreamed by visiting https://www.facebook.com/carlislebranson/. Carlisle - Branson Funeral Service & Crematory is serving the family. Visit www.CarlisleBranson.com to share a favorite memory or to sign the online guest registry.

To order memorial trees or send flowers to the family in memory of James B. Norris , please visit our flower store.