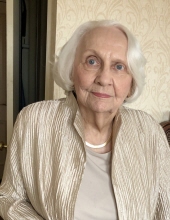 Janet McClain, 91, of Fishers, Indiana passed away on October 25th, 2020. She was born on December 6, 1928 in Morgan County, Indiana and later graduated from Mooresville High School in 1946. She became one of the early women in what is now the Indiana University Kelley School of Business and graduated in 1950.

While at IU, she met Glenn McDonald whom she married on January 14th, 1951. They spent most of their lives in Kirklin, Indiana where they raised a beloved family of five daughters. Janet selflessly gave up a career in corporate retailing to instead be a devoted stay at home mother, which brought her great joy. She poured everything she had into raising the girls to be strong women capable of achieving their dreams. In addition to her parenting, she loved to help create opportunities for other youth in the community through her work as a 4-H leader and extensive involvement in the schools. She was instrumental in opening a center for youth in Frankfort, Indiana, and later worked for the Clinton County Welfare Department. In her free time she enjoyed playing the piano and organ, crafts, the PM club and playing cards. She also maintained very close friendships throughout her life with high school and college friends.

Her Christian faith was always an important part of her life, starting with the Methodist Church in Mooresville and later as a lifelong member of the Kirklin Yoke Ministry Church. She had a beautiful and optimistic approach to life, always reminding those around her to have faith and know that problems are almost never the worst case scenario. She encouraged others by saying, “You are trying your best and Angels can’t do better”. She will forever be remembered as a woman who was kind, giving, smart, fierce, and never gave up on people she loved. It is without a doubt that the world is a better place because she was a part of it.

She was widowed in 1999 after 48 years of marriage to Glenn McDonald and was incredibly blessed again when she married Jack McClain in May of 2005. She experienced two blissful years before he passed away in 2007. She will be lovingly remembered by her 5 daughters Janis Shaffer (David), Ann Musser (Bob), Karen Walker (Ken), Amy McDonald and Ellen Hines, as well as 8 adoring grandchildren and 8 great grandchildren. Additionally, she is survived by her sister Rosemary Kellum of Mooresville and was preceded in death by her parents, Reuben and Gladys Aldrich of Mooresville and brother Reuben Aldrich.

Janet always showed a great love of the community and was heavily involved throughout her life in creating opportunities for children in the Clinton County community. Contributions, in lieu of flowers, may be made to The Bridge, P.O. Box 274, Kirklin, IN 46050 https://www.thebridgekirklin.com/ or to an organization of your choice.

To order memorial trees or send flowers to the family in memory of Janet Lee McDonald McClain, please visit our flower store.