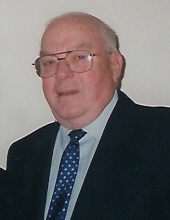 Jasper Newton Dirlam, 90, passed away on September 17, 2020, at his home in Mooresville, Indiana surrounded by family. Jasper was born on October 20, 1929 to parents Horace and Josephine Dirlam in Bismarck, North Dakota. They lived on a 320 acre farm near Mennoken, North Dakota until a severe drought caused crop devastation. After two years without any harvest, the family packed up and moved to Indiana, settling on a farm in Bowling Green, Indiana.

Jasper attended Patrickburg High School, where he was a talented basketball player and class officer, graduating in 1947. Most importantly, this is where Jasper met Ruth Hauser. They were wed on June 3, 1950 and were happily married for 61 years until Ruth’s passing on October 29, 2011.

After high school, Jasper attended Butler University and then Indiana State University, where he transferred to be closer to Ruth who was enrolled at Indiana State Teacher’s College. A Korean War veteran, Jasper served for 2 years in the U.S. Army as a paratrooper in the 508th Airborne Company. Jasper proudly worked for GM Allison Transmission for 40 years. During his tenure, he held numerous responsible positions in Material Control until he retired in 1989 as a supervisor with the department.

Jasper loved raising Shropshire sheep and did so for over 60 years. In addition to showing at local, state, and national shows, he served as a Director for the American Shropshire Registry, a Director for the Board of Animal Health of the State of Indiana, and a Superintendent of the Morgan County Fair Sheep Barn. He was the recipient of numerous awards, including the Oren A. Wright Award for outstanding service to the Indiana Sheep industry, and more recently, the Lifetime Achievement Award in 2015 at the Indiana State Fair awarding him a lifetime pass to the fair. In 2016, Jasper was selected for the Honor Flight honoring his military service. He was a member of the Morgan County Democratic Committee and the American Legion of Coal City. Jasper also had a great love for border collies and always had one riding alongside him in his truck. Jasper was passionate about IU basketball and had season tickets for decades. Jasper was an incredibly caring and generous man; he donated to many causes and charities; he always bought raffle tickets for local fundraisers; and he gave to his church, St. Stephen’s Lutheran Church. He also loved to travel and spent much of his time exploring with Ruth and their cherished companions, Jasper’s brother, Jim and sister-in-law Norma.
Jasper loved his family. He and Ruth had two beloved sons, John and Mark, and two grandchildren that they adored, Lindsay and Matt. He never missed a track meet, a basketball game, or any other event involving his family.

Jasper never met a stranger and was a gifted conversationalist. At his core, he loved supporting his family, his friends, his neighbors, and those he met through his passion for raising sheep. He truly left an impression on everyone he met and will be remembered for his kind heart, his giving spirit, and his easygoing nature.

Visitation will be Monday, September 21, 2020, 4 to 7 p.m., at the Carlisle – Branson Funeral Service & Crematory, Mooresville. The funeral service will begin at 1:30 p.m., Tuesday, September 22, 2020, at the funeral home. Committal service & burial will follow at 4 p.m., Tuesday, in the Worthington Cemetery, Worthington. Memorial contributions may be made to your favorite charity that benefits animals. Visit www.CarlisleBranson.com to share a favorite memory or to sign the online guest registry.

To order memorial trees or send flowers to the family in memory of Jasper Newton Dirlam , please visit our flower store.