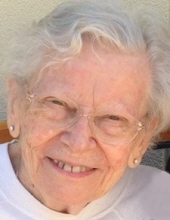 Jerilyn Ruth Fawcett came into this world in Grand Rapids, Michigan on July 25th, 1925, living to the age of 96 before answering the call of the angels on December 22nd, 2021.

Jerilyn—known to friends and family as “Jeri”—was the second of four children born to Gerald and Leona Barnes, raised in Indianapolis, and was the last surviving member of her original family. She was a graduate of Shortridge High School. As a young woman, she became fond of ice skating, eventually meeting her future husband, Russell, while skating at the Indianapolis Coliseum. Jerilyn married Russell Fawcett in 1947 and spent nearly 71 years as a loving wife and mother before Russell’s passing in 2018. Together they raised three children who survive them- Gregory, Jeri, and James. She enjoyed watching her own family grow over the years to include 5 grandchildren and 11 great-grandchildren.

After retiring, Jerilyn and Russell moved to N. Fort Myers, Florida, and lived in a golf course community there for many years until eventually returning to the Mooresville area of Indianapolis, to be near her youngest son Jim in later years. Jerilyn had an affinity for numbers and was a skilled business accountant, working years in that capacity for several companies in Indianapolis. She operated her own business as a registered Tax Specialist and paid-preparer into her late 80’s. She was particularly proud of having received a letter of recognition from the IRS for having prepared and submitted hundreds of federal tax returns without any being cited for errors.

Services were delayed due to concern for Covid-19 issues, but are now planned for April 23rd at 1:00 pm at Carlisle Branson Funeral Service & Crematory, Mooresville. A private interment will follow the service.

To order memorial trees or send flowers to the family in memory of Jerilyn Fawcett, please visit our flower store.