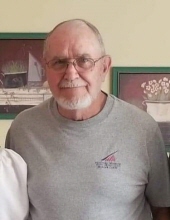 The family moved to Indianapolis when Jerry was 2 years old. He graduated from Ben Davis High School and he proudly served in the United States Marine Corp during the Vietnam War. Jerry worked for 25 years at the Allison Division of General Motors, retiring in 1993, as a test mechanic. Always armed with a strong work ethic, Jerry continued working as an owner/operator truck driver for 20 years, being associated with Dave Scott Trucking. Jerry was strong in his faith in Christ and was a faithful member of Hazelwood Baptist Church. He enjoyed riding motorcycles and also enjoyed racing in his younger years. Jerry also loved his dogs, especially black labs. He was most proud of his family and the legacy that will continue. Jerry will be fondly remembered for his loyalty, kindness, and generous nature.

In addition to his parents, he was preceded in death by siblings, Robert Dougherty, Virginia Purdue, and Patricia Dougherty; great grandchildren, James and Henry Dougherty.

Jerry’s Life Celebration® visitation and funeral service will be held at Carlisle – Branson Funeral Service & Crematory, Mooresville. Visitation will be Wednesday, August 4, 2021, 5 to 7:30 p.m., with the funeral beginning at 10 a.m., Thursday, August 5, 2021. The committal service will begin at 2 p.m., Thursday, in Plainville Cemetery, Plainville. Memorial contributions may be made to Seedline International http://www.seedline.org/ or to Lifegate https://www.godssimpleplan.org. Visit www.CarlisleBranson.com to share a favorite memory or to sign the online guest registry.

To order memorial trees or send flowers to the family in memory of Jerry G. Dougherty, please visit our flower store.