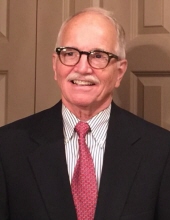 John graduated from Martinsville High School in 1963 and attended Indiana Central Business College. An honest, dependable, and intelligent man, John enjoyed a successful career in banking that spanned 40 years. Early on, he was employed with American Fletcher National Bank before working 39 years with First National Bank in Martinsville, retiring as a Vice President. John was a member of the Elks Club & Kiwanis Club and enjoyed fishing and raising Tennessee Walking Horses. His favorite pastime involved spending time with his four granddaughters. John will be fondly remembered for his kindness, fun sense of humor, and love for his family.

In addition to his parents, he was preceded in death by a sister, Janice.

According to John’s wishes, cremation will take place and private family services will be observed. Inurnment will take place at a later date at Mt. Pleasant Cemetery, Hall. Memorial contributions may be made to the Idiopathic Pulmonary Fibrosis Foundation, https://ipffoundation.org. Carlisle – Branson Funeral Service & Crematory is serving the family. Visit www.CarlisleBranson.com to share a favorite memory or to sign the online guest registry.

To order memorial trees or send flowers to the family in memory of John Poston Russell, please visit our flower store.