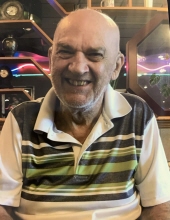 Larry G. Hensley, Sr.
77, of Brownsburg, passed away on December 20, 2021 at his home, surrounded by his family. Larry was born on June 12, 1944 in Greeneville, Tennessee to the late Lude J. Hensley and Emily (Shelton) Hensley.

Larry enlisted in the United States Air Force out of high school in 1962 and was honorably discharged in 1968. Larry later retired from GM Truck & Bus after 47 years as a tool and die maker. He enjoyed golf, bowling, and reading Stephen King novels, but his greatest passion in life was his family. His heart beat for his grandchildren. Papa George made sure all his grandchildren were loved and his deep booming laugh and warm hugs will be missed.

In addition to his parents, he was also preceded in death by brother Richard Hensley and a son, Larry George Hensley, II.

Memorial contributions are preferred to be made in Larry’s memory to the Curtain Call Dance Center, 1833 Expo Lane, Indianapolis, IN 46214 benefiting their Relay for Life fundraising.

To order memorial trees or send flowers to the family in memory of Larry George "LG" Hensley, Sr., please visit our flower store.