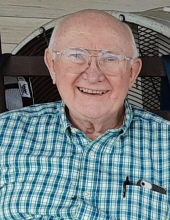 86, of Greenwood, passed away peacefully with his family by his side on June 24, 2022. Luther was born to the late Luther R. Sr. & Rosa Norris on June 17, 1936 in Bedford, Indiana. Luther was a graduate of Washington High School and went on to own and operate his family business, Quality Electric in Terre Haute. He would later become involved in using his electrical skills to teach and educate students in electrical work. Luther was a sponge when it came to learning. He loved to continue his education any way he could. Luther was an Elder and a long time member of Mount Pleasant Christian Church in Greenwood, Indiana. He enjoyed annoying , aggravating and playing practical jokes on his family and friends! It was very common for the whole family to travel together. He especially loved to take the grandkids on vacation without their parents. He also enjoyed traveling with his wife to places such as Gatlinburg, Hawaii, Jamacia, Spain and Germany.

Luther is preceded in death by his first wife; Doris Norris and his 6 siblings.

Visitation will be held on Tuesday, June 28, 2022 at Carlisle-Branson Funeral Service & Crematory from 12:00pm.-2:00pm
Funeral Services will be immediately following in the Funeral Home. Burial will private.

Funeral arrangements have been entrusted to Carlisle-Branson Funeral Service and Crematory. Condolences can be left for the family of Luther R. Norris at www.carlislebranson.com

To order memorial trees or send flowers to the family in memory of Luther "Red" Norris, please visit our flower store.