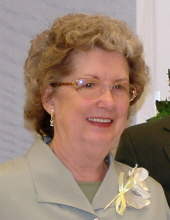 Margie R. Miller
94, of Mooresville, passed away on July 10, 2021 at Miller’s Merry Manor in Mooresville. Margie was born on June 18, 1927 in Graysville in Sullivan County, Indiana to the late Ralph and Inez (Reich) Harris.

Margie attended primary schools in Graysville and graduated from Plainfield High School in 1945. On December 16, 1947, Margie married Jack E. Miller. For nearly 75 years, Margie and Jack built a life together, raising three children: Jack, Nolan, and Carol. She loved to travel, especially out west and enjoyed seeing the mountains. She also enjoyed sewing, often making clothes for her children when they were young; painting in oils, acrylics, and watercolors, and was an avid reader of mysteries.
In addition to raising her children, she worked as head cashier for Kroger’s in Martinsville for many years, before retiring in 1975.

In addition to her parents, she was preceded in death by a son, Jack E. Miller, Jr., a granddaughter Jennifer Baire, and brothers Robert Harris and Bill Harris.

Friends and family will gather to celebrate Margie’s Life on Saturday, August 14th from 2-4pm at Carlisle Branson Funeral Service & Crematory, Mooresville, with services beginning at 4pm Saturday in the funeral home.

To order memorial trees or send flowers to the family in memory of Margie R. Miller, please visit our flower store.