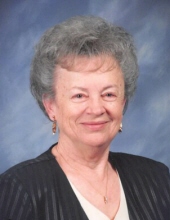 Mary Jean Petersen of Mooresville IN, passed away on February 22nd, 2022.
Mrs. Petersen was born April, 22, 1924, in Mooresville, to Roy and Emma Sanders. She graduated from Mooresville High School in 1942 as class Valedictorian.

On June 14, 1942 she married William L. Keller. After he returned from the service they lived, owned, and operated the family generational farm north of Waverly. Mr. Keller passed away on July 5th, 1976 after 32 years of marriage.

She retired in May 1986, after 30 years of service, at AM General Corporation in Indianapolis. She was an active member of the Church at Mt. Gilead, where she was a lifelong attendee after being baptized there in 1937. On August 8th, 1987, she married Alvin G. Petersen of Tilden, Nebraska. They split the time between the two homes, summering in Nebraska where Mr. Petersen was a farmer until his retirement at the age of 81 and winters here in Indiana. Mr. Petersen passed away in 2015 after 28 years of marriage with Mary Jean.

Mary Jean spent her free time in several hobbies. She enjoyed reading her Bible, while also finding joy in knitting, crocheting, and doing embroidery. She did her best to travel to every country she could with Israel and Thailand being two of her favorite destinations. She also loved attending her grandchildren’s soccer and basketball games.

In addition to her parents and husband William Keller, she is preceded in death by her husband Alvin Petersen, stepsons George and Tim Petersen, and stepdaughter Merna Vandeveer.

Visitation will be held 10 a.m. to 2 p.m., Friday at Mt. Gilead 6019 E SR 144, Mooresville, IN. Additional visitation will be held Saturday 12 – 1 p.m. at Carlisle – Branson Funeral Service & Crematory, followed by the funeral service beginning at 1 p.m. Burial will follow services at Mooresville Cemetery. The family requests that all attendees wear masks for everyone’s safety.

Memorial contributions may be made in Mary Jean’s memory to the Church at Mt. Gilead or the Alzheimer’s Association.

To order memorial trees or send flowers to the family in memory of Mary Jean Petersen, please visit our flower store.