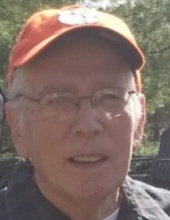 Max Steven Johnson
79, of Mooresville, passed away on November 30, 2021, at Meadow Lake in Mooresville. Steve was born on October 16, 1942, in Indianapolis, to the late Myron and Mary Lou Johnson (Pease).
Steve, graduated from Monrovia High School class of 1960 in Monrovia Indiana and then he married the love of his life, Yvonne C. (Palmer) Johnson on May 4, 1963. Together they were married over 58 years and had three children, Brian (Dawn) Johnson, Gina (Tony) Longere, Brad (Jenny) Johnson.
In his younger years, he worked at the Allison Transmission plant. After a short career in production, Steve went on to work the rest of his years in banking. Steve worked for Citizens Bank, Bank One, and First Merchants Bank, all while being a part time farmer. Steve was very involved in Morgan County 4H in his childhood and later with his children. Steve was an avid sports fan following his favorite teams the Colts, Pacers, Purdue, and Clemson. After retirement, Steve spent most of his time woodworking and spending time with family. Steve and Yvonne were always at the grandchildren’s games to cheer them on. Steve loved spending time at the Whipporwill house and fishing. He loved to fish and spend time at the property. Above all, Steve will be remembered for his strong devotion to his family.
In addition to his parents, he was also preceded in death by a brother Terry Johnson who was killed in Vietnam.
Steve also leaves behind grandchildren, Isabella Johnson, McKenna Johnson, Chris White, Alaina Longere, Tara (Justin) Longere, Zach Johnson, Mitchell Johnson, and Nolan Johnson and 3 great grandchildren.
Family and friends will gather for Steve’s Life Celebration® visitation on Monday December 6, 2021, from 4-8pm at Carlisle Branson Funeral Service & Crematory, Mooresville. A Funeral will be held on Tuesday December 7, 2021, at 11am at Carlisle Branson Funeral Service & Crematory in Mooresville Indiana. Burial will be at Mt. Pleasant Cemetery, Hall. Please visit www.CarlisleBranson.com to share a favorite memory or to sign the online guest registry.

To order memorial trees or send flowers to the family in memory of Max "Steve" Steven Johnson, please visit our flower store.