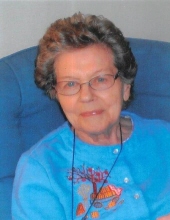 In an effort to limit the number of people gathering at one time, Mrs. Norton will lie in repose on Friday, December 18, 2020, after 8:30 a.m. at Carlisle - Branson Funeral Service & Crematory for anyone who wishes to pay their respects at the casket and sign the register book. Visitation will be held from 12:30 p.m. - 2:30 p.m. Friday, with a service beginning at 2:30 p.m. Burial will be at White Lick Cemetery. The funeral will be livestreamed on the Carlisle - Branson YouTube channel by visiting www.CarlisleBranson.com. Those attending will be required to wear a mask and practice physical distancing. Memorial contributions may be made to the Alzheimer's Association and Riley Hospital for Children.

To order memorial trees or send flowers to the family in memory of Maxine Alberta Norton , please visit our flower store.