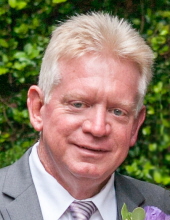 After graduating from Southport HS in 1973, Mike proudly served in the United States Navy as an air traffic controller during the Vietnam War from 1974 to 1976. He then worked for the Federal Aviation Administration until 1981 and retired from AT&T as Area Sales Manager, Yellow Page Division. In 2010 to present he was employed by Clean Air Concepts, Magnegrip Division, in Cincinnati, OH as VP of Sales.

Mike was a very social person who had a passion for water and boats. He and Cindy were married at Lake Monroe on her parents’ boat on September 14, 1986. They spent many years on weekends boating at Dale Hollow Lake in Tennessee, where they met lifelong friends. He loved helping his friends pilot their boats on several trips including the Tombigbee Waterway, the Great Lakes, East Coast and the Florida Keys. He also loved just spending time at the lake with family and friends. He had a big heart and would always lend a helping hand when he could. He had a knack for being able to fix anything and enjoyed tinkering in the garage. He was quick witted, easy going, fun to be around, but could also be stubborn. Mike will be greatly missed by his family and friends.

Mike’s Celebration of Life will be held at Camby Community Church, 8604 Camby Rd, Camby, IN 46113. Visitation will be Thursday, October 14, 2021 at 10am with a Memorial Service following at 12 noon. While flowers are welcome, Memorial contributions may be made to: Indiana Donor Network. Visit www.CarlisleBranson.com to share a favorite memory or to sign the online guest registry.

To order memorial trees or send flowers to the family in memory of Michael Wayne Johnson, please visit our flower store.