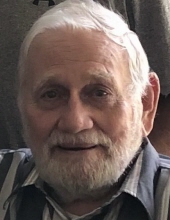 Gil attended Rockport High School in Rockport, Indiana, where he played football, caused trouble, and enjoyed swimming in the Ohio River with friends. Gil enlisted in the U.S. Army in February 1951. He was stationed in Alaska for much of his military service during the Korean War. Many of his Army stories centered around playing poker and various hijinks and shenanigans with his fellow soldiers.

Gil returned to Indianapolis upon his honorable discharge from the Army. He spent much of his adult life working in the trucking industry. He later became a full-time carpenter, a trade learned from his father. Gil was a very talented woodworker, and passionate collector of antique tools, especially wood planes. Gil was a long-time member of the Midwest Tool Collector’s association. He volunteered many summers with them at the Indiana State Fair exhibiting part of his collection and demonstrating the use of the old tools. Gil drank black coffee by the gallon, rolled his eyes at “puns”, loved to read, and enjoyed watching old TV shows. He was a highly competitive player of both Euchre and Scrabble and was frequently challenged to prove the words he played by his late mother-in-law, who was certain he made some of them up.

It was Gil’s wish to not have a public visitation or memorial service. A family celebration will take place at a later time in which his ashes will be spread in one of his favorite places

To order memorial trees or send flowers to the family in memory of Orville Gilbert Lynch Jr., please visit our flower store.