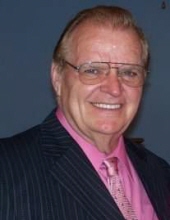 Pastor Rooker had recently retired from New Life in Christ Family Worship Center in Mooresville, where he pastored for 38 years. He was also a member of Gospel Ministers and Churches International in Phoenix AZ. He had a passion for ministry and music. Pastor Bill earned a Doctorate of Divinity Degree from Church and Ministerial Association in Cleveland, Tennessee.

He was a man of faith who served Jesus and preached His word with power. He was called to preach at an early age of 9, and he followed that calling later in life.

He worked part time for Andy Mohr transporting vehicles and previously worked for Economation. He also served in the United States Army.

He loved his family; Bill was a dedicated and devoted husband, father, grandfather and a proud great grandfather.

He was a passionate guitarist who started playing music with "Keetie and the Kats", Donnie (Sax) Sanders, and Joe Edwards. He later started his well-known band "Rooker and the Rockers", which led him to induction in the Indianapolis Rock and Roll Hall of Fame.

He was well known for his smile. His favorite pastime was studying and reading his Bible, which was his favorite book. Pastor Rooker will be fondly remembered by his loving family and many friends.

Visitation will be Saturday, February 13, 2021, 12 to 2 p.m., in Springhill Christian Center, with services beginning at 2 p.m. Pastors Mark Wright and David Gibson will officiate. Burial will follow at White Lick Cemetery. Funeral arrangements are entrusted to Carlisle – Branson Funeral Service & Crematory, Mooresville. Visit www.CarlisleBranson.com to share a favorite memory or to sign the online guest registry.

To order memorial trees or send flowers to the family in memory of Pastor William F. “Bill” Rooker, please visit our flower store.