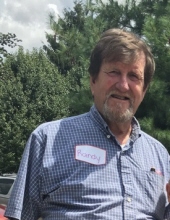 68 of Mooresville, passed away on April 11, 2022, at St. Francis Hospital in Indianapolis. Randy was born on May 5, 1953, in Dayton, Ohio to the late Robert Dougherty and Josephine (Taylor) Dougherty.

Randy worked in banking as a processor for Bank One and later Chase, before retiring. Randy enjoyed being outdoors, whether it was taking a walk or spending time tending to his flower and vegetable garden. He was a member of the Morgan County Master Gardeners. He will be dearly missed by a loving family and friends.

In addition to his parents, he is preceded in death by a brother Ron Dougherty.

No formal services will be held at this time. He will be cremated and laid to rest in Arlington Cemetery in Brookville, Ohio.

To order memorial trees or send flowers to the family in memory of Randall S. "Randy" Dougherty, please visit our flower store.