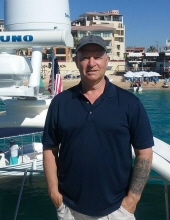 Rickey W. Mendenhall
58, of Scottsburg, passed away on April 15, 2021 at University Hospital in Louisville. Rick was born on October 21, 1962 in Avon, IN to the late Claris (Tharp) and Cecil Mendenhall.

Rick worked as a machinist for Federal Mogul and drove a truck for UPS, TruLite and most recently with J&W Trucking. Family first, was Rick’s motto. He enjoyed spending time with his family, especially his grandkids. He enjoyed talking with family on the phone, farming, listening to classic rock and roll and playing Fortnite as his gamer handle “Roadblock Rick”.
Additionally, he enjoyed traveling with his wife, Rochelle to Florida, Cabo, the Philippines and had planned for a trip to the Maldives for later this year. He will be fondly remembered as a sweet, jolly man, a practical joker, who enjoyed napping or as he referred to it… “just resting my eyes”. He will be dearly missed by his family and friends.

In addition to his parents, he was preceded in death by a brother Robert.

Visitation will be held on Wednesday, April 21st from 4-8pm at Carlisle Branson Funeral Service & Crematory, Mooresville, with services beginning at 11:00am Thursday, April 22nd in the funeral home. Burial will follow the services in Fairfield Friends Cemetery, Camby.
You are encouraged to make a memorial contribution to a College Fund for Riley Mendenhall in c/o First National Bank.

To order memorial trees or send flowers to the family in memory of Rickey W. Mendenhall, please visit our flower store.