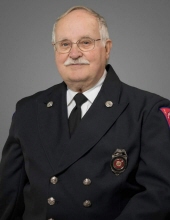 Rodger James Birchfield, 81, Camby, Assistant Public Information Officer and Historian of the Indianapolis Fire Department, passed away unexpectedly December 21, 2020. Rodger was a true public servant and fire historian, born September 30, 1939, in Danville, Illinois. He was ten days from his long-awaited retirement, when he was found resting peacefully in his recliner.

He was a reporter for many years for the Indianapolis News, retiring in 1999. When the newspaper closed, there happened to be a paid position available with IFD. This made way for a dream job for Rodger; as he put it, “I get paid to chase fire engines.” He was a long-time member of the Madison Township Volunteer Fire Department, Dalmatian Club of Indianapolis, the Professional Car Society of Indiana, and the Indianapolis Fire Buffs. Rodger was a founder member of PPPSI, Pompier, Pump & Playpipe Society of Indiana. He was also a member of and officer of SPAAMFAA, Society for the Preservation & Appreciation of Antique Motor Fire Apparatus in America. A published author, Rodger wrote the following books: Stutz Fire Engine Co. Indianapolis, New Stutz Fire Apparatus Co. Inc. Hartford City, IND, Stutz Fire Engine Company Commemorative Edition, Indianapolis Fire Department: 1993-2007, and Boyer Fire Apparatus, Fire Equipment and Fire Department Supplies. In 2013 Rodger Birchfield was awarded an IFD Public Safety Service Commendation. In 2015 He was awarded the State of Indiana State Fire Marshal Meritorious Service Award.

Rodger was one of three sons, including Charles and Raymond.

Visitation will be Monday, January 4, 2021, 4 to 7 p.m., at Mt. Gilead Church, 6019 East State Road 144, Mooresville. The funeral service will be held at the church, Tuesday, January 5, 2021, 10 a.m. The service will be live streamed by visiting https://www.facebook.com/carlislebranson/. Cremation will follow at the Morgan County Crematory. Memorial contributions may be made to SPAAMFAA National Archives, in memory of Rodger Birchfield, 5808 Chancellor Lane, Morrow, OH. 45152-8967. Carlisle – Branson Funeral Service & Crematory is serving the family.

To order memorial trees or send flowers to the family in memory of Rodger James Birchfield, please visit our flower store.