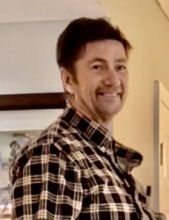 Roger A. Neibel, 57, Columbus, passed away after a three-year battle with bladder cancer on January 28, 2022. Roger was born July 17, 1964, in Greencastle, to the late Robert Lee Neibel and Dana D. (Dow) Neibel, who survives.

Roger worked for AVI Food Catering and later became a full-time trader and barterer. He was very mechanically inclined and could fix just about anything. Roger enjoyed boating, camping, motorcycle riding, and family gatherings. Family meant the world to Roger, and he never missed an opportunity to be with his loved ones. His sense of humor was second to none, and he will be fondly remembered for his ability to make others laugh.

He was preceded in death by his wife of 19 years, Dana R. (Brown) Neibel.

According to Roger’s wishes, services will not be observed. Cremation will take place at the Morgan County Crematory. Carlisle – Branson Funeral Service & Crematory, Mooresville, is serving the family. Visit www.CarlisleBranson.com to share a favorite memory or to sign the online guest registry.

To order memorial trees or send flowers to the family in memory of Roger A. Neibel, please visit our flower store.