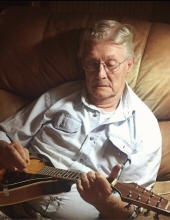 Roger was born and raised a farmer. He enjoyed raising cattle, pigs, and row crops. He also worked for the Local Union 103 as an operating engineer for over 25 years. Roger was a jack of all trades. He could fix just about anything with bailing wire and duct tape. His favorite task on the farm was bailing hay. Roger grew up attending dirt races, demolition derbies and enjoyed watching NASCAR. He also enjoyed gardening, bluegrass music and playing the mandolin. Roger was a family man and his children, grandchildren, and great grandchildren, gave him such joy. Roger’s favorite holiday was Christmas and he enjoyed Jeanie’s homemade dumplings and oyster dressing. Some of his favorite desserts were chocolate pie’s, no-bake and oatmeal chocolate chip cookies. His witty humor is going to be greatly missed by his loving family and friends.

In addition to his parents, he was preceded in death by his siblings, Richard Russell, Joetta Hughes, and Udell Jewel Russell; son-in-law, Buck Richhart; and grandson, Shane Miles.

Friends and family will gather to celebrate the life of Roger L. Russell Wednesday, March 10, 2021, 4 to 8 p.m., at the Carlisle – Branson Funeral Service & Crematory, Mooresville. The funeral service will begin at 12:00 p.m., Thursday, March 11, 2021. Burial will be in I.O.O.F. Cemetery, Waverly, Indiana. Visit www.CarlisleBranson.com to share a favorite memory or to sign the online guest registry.

To order memorial trees or send flowers to the family in memory of Roger L. Russell, please visit our flower store.