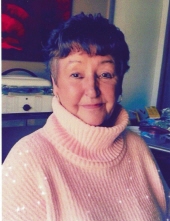 She graduated from Mooresville High School. Mrs. Hamilton worked at the former Clarks Creek Nursing Home and also at Chez Jean through the years. She was a faithful member and past worthy matron of the Mooresville Order of the Eastern Star. She enjoyed eating out, staying in touch with friends, and never turned down a competitive Euchre game. Tamyra will be fondly remembered by her loving family and friends.

In addition to her parents, she was preceded in death by her husband, Herman Hamilton; son, Charles Hamilton; brother, Charles Shrake.

According to Tamyra’s wishes, services will not be observed. Private burial will be in West Newton Cemetery. Carlisle – Branson Funeral Service & Crematory, Mooresville, is serving the family. Visit www.CarlisleBranson.com to share a favorite memory or to sign the online guest registry.

To order memorial trees or send flowers to the family in memory of Tamyra Lynn Hamilton, please visit our flower store.