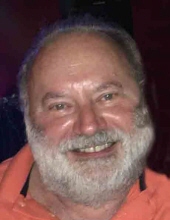 He graduated from Howe High School and earned an associate degree from ITT. Tom worked for Bowers Envelope, Antreasian Design, and retired from Sims Cabinet as a draftsman. He was a SAL member of the American Legion Post #103. As a younger man, Tom was a power lifter and body builder, being named Mr. Indianapolis on two occasions. He also competed in the Mr. Olympian competition. He also enjoyed riding his motorcycle and drag racing. Tom will be fondly remembered for his kind and thoughtful nature, his funny sense of humor, and his wonderful smile.

Survivors include his wife, Mary (MacKinnon) Agan, to whom he was united in marriage August 25, 1997 and a sister, Carol (Herb) Hoffman of Mooresville.

A Celebration of Life will be held at a future date at the American Legion Post 103. Carlisle – Branson Funeral Service & Crematory is serving the family. Visit www.CarlisleBranson.com to share a favorite memory or to sign the online guest registry.

To order memorial trees or send flowers to the family in memory of Thomas R. Agan, please visit our flower store.