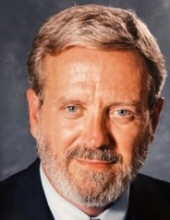 80, of Plainfield, passed away on August 31, 2022. He was born to Mildred Jaquess and J. Norman Muth on December 12th, 1941 in Evansville, Indiana. He was married to Charlene L. Mullins Muth for 59 years. He is survived by his wife, Char, a brother, Jim (Peggy), his son, Robert (Ellen), his daughter, Dianne (Bob), nine wonderful grandchildren (Ryan (Brittney), Jordan, Ivan, Taylor, Kyle, Anna, Charlene, Julie), and two great-grandsons (Calvin, Caleb). They remember him as a fun grumpa.

He graduated from Indiana University, with a Bachelor’s Degree in Bacteriology in 1964. After doing research for three years at Abbott Laboratories on animals of economic importance, he returned to school at Michigan State University where he earned both a Masters Degree and a Doctorate in Microbiology and Public Health. After a year’s postdoctoral fellowship, he joined Eli Lilly and Company in July 1973, where he thrived for nearly thirty years before retiring in 2002 as a Research Advisor.

He began his career at Lilly with research on various human and veterinary antibiotics, making economically important progress on their potency and production. When the advent of human recombinant protein expression began in the late 70’s, Bill became the fermentation scientist associated with the expression of human insulin precursors in Escherichia coli for the ultimate expression commensurate with manufacturing. Subsequently, he developed the fermentation process for the first human growth hormone produced in a microorganism. Finally, he made significant contributions to the production of a long-acting insulin, Humalog. Before retiring, he expressed more than fifteen different proteins in microbial systems. In addition, he mentored many young scientists whom he enjoyed seeing take thriving steps forward in their own careers.

He had a lifelong love of sailing gained from his parents, who taught him to appreciate the wind. He enjoyed sailing both on inland lakes, and on the ocean (blue water). Many fun memories of the ocean adventures linger. He and Char loved to travel not only all over the US, they were fortunate to visit China, Russia and many countries in Europe.

There will be no formal internment service, but instead a wake to celebrate Bill will be held at Big Woods Speedway on Friday, September 9th from 3:00-6:00pm. In lieu of flowers, please consider your favorite charity with a donation to his memory. He especially liked the foundations associated with IU Natural Science, Biology Department, Walter Konetska. The Indianapolis Zoo Education Fund is also a good choice.

To order memorial trees or send flowers to the family in memory of William "Bill" Muth, please visit our flower store.