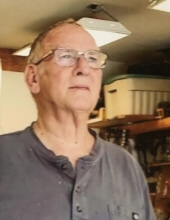 In addition to his parents he was preceded in death by his wives Sheila Toon and Joan Toon and as well as brothers Charles, Benjamin and Harold Toon.

Bill proudly served his country in the U.S. Air Force. After service he embarked on a career as a mechanic for Yellow Freight for 30 years before retiring in 2001. He was a member of the American Legion Post #777 and Teamsters Local #135. Bill was an avid bird watcher. He also enjoyed spending time with family and friends, fishing, playing cards and dice and grilling out. His biscuits and gravy were a favorite of many family and friends.

Graveside services will be held on Friday at 1:00pm in Acton Cemetery, Indianapolis.

To order memorial trees or send flowers to the family in memory of William D. "Bill" Toon, please visit our flower store.