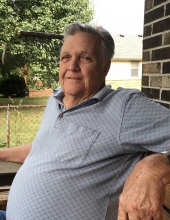 Butch proudly served his country in the U.S. Army, stationed in Korea. After he returned home from service, Butch worked as a supervisor for Reilly Industries for 30 years, before retiring. However, retirement didn’t suit Butch, so he went to back to work for NAPA Auto Parts as a delivery driver for 10 years, before retiring a second time. Butch was a member of the Brownsburg Baptist Church and the American Legion Post in Indianapolis. He enjoyed playing the lottery with scratch off tickets, family vacations to Florida and Fried Chicken. He will be dearly missed by his loving family.

Family and friends will gather to celebrate Butch’s life on Friday, February 11th from 6-8pm at Brownsburg Baptist Church, 3331 N. County Road 900 East. Funeral Services will be held on Saturday, February 12th at 12:30pm at the church. Burial will follow the services in Floral Park Cemetery.

In lieu of flowers, memorial contributions are encouraged to be made in Butch’s memory to the Building Fund or to the Mission Projects at Brownsburg Baptist Church, 3331 N. County Road 900 East, Brownsburg, IN 46112.

To order memorial trees or send flowers to the family in memory of William E. "Butch" Brackett, Jr., please visit our flower store.